I happened to be in Denmark on election day last week, and was lucky enough to have some Danish friends to both show us around and talk politics. A few things struck me strongly from dipping my toe into Danish politics. 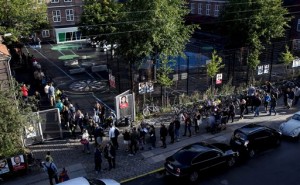 Firstly, turnout – Deep in conversation about what polling day is like in Denmark (much like here), how long polling stations are open (much shorter than here) and how long it takes to count votes (about 4-5 hours) and how people feel about politics (strongly, in most cases) we got to turnout. My friend was fall-on-the-floor shocked that turn out in UK elections is so low.

Turnout there was 88% this time around, slightly higher than in 2007. In the 2010 UK elections it was 65%. Denmark has very high turnout, even though it doesn’t have mandatory voting. A quick glance at turnout in the UK for the last 66 years shows that we’ve not been anywhere near that high since the 1950s. Turnout was at least over 70% between 1945 and 1997 – what happened after that? It can’t be simply a reflection of who’s in power can it? And the litany of political and economic scandals and crises are of course depressing, but not really anything new. Obviously there are whole careers and branches of social science devoted to psephology, but I wonder if the explosion of the web, latterly, social media has actually had a negative effect on actual, physical voting?

Second thing: Young people are engaged in politics, both in terms of voting, being informed and discussing it with their friends, but also being involved politics itself. Much has been written about ‘the new Queen of Red-Green politics’ (or ‘the Communist Princess’ as my friend called her) Joanne Schmidt-Nielsen. Impressive leader among the Red-Green Alliance of left wing parties at only 27, she’s well respected for her intellect and her debating skills. (In 2007 she participated in a debate for party leaders on TV 2 on the evening before the election as the youngest candidate ever to participate in a nationally televised debate for Danish party leaders.[14] It’s not all laudatory though, according to Wikipedia, prior to the debate, the leader of the Conservative People’s Party, Bendt Bendtsen, mistook her for an office girl and asked her to fetch him coffee).[14] Stella Creasy experienced a similar reaction from the Male, Pale & Stale oldguard in Parliament here when she was ticked off for using a MPs Only lift.

However, Schmidt-Nielsen is just one of a host of younger people who are a part of political and civic life in Denmark. In the UK young people in politics are something of an anomaly, seen as a bit square perhaps, although politicians are constantly trying to seem relevant, young and vital. [Insert your own favourite cringe inducing politician-wears-baseball-cap moment here]. The youngest person in the House of Commons is called the Baby of the House, currently the baby is Pamela Nash, who at 27 is the same age as Joanne Schmidt-Nielson. Former luminaries of this quaint and rather patronising title include Tony Benn, John Profumo (twice), and Davids Steel and Lammy, who perhaps don’t have much else in common.

Thirdly, Coalitions are normal – Denmark has coalition politics as a matter of course, so the fact of a coalition is not unusual. There was excitement among those we met about a change of government, and in particular, pleasure that the extremist Danish People’s Party would finally lose influence. In terms of process, it was interesting to learn that the parties are required so say who they would prefer as Prime Minister, so voters know who they’d get as a leader, while still being able to vote with their convictions for the party that best matches their beliefs.

Two theories abounded about how things will pan out, one that new Prime Minister Helle Thorning-Schmidt (coincidentally married to Stephen Kinnock) would find it very hard to build an effective coalition with such a slim majority of the Left Bloc which is not so much a bloc as a loose and prickly bundle. And that this would be exacerbated because she is given a very hard time in the media for being ‘hard’ and ‘icy’, not characteristics that are approved of in a woman, whether or not she’s leading a country. Secondly, that the previous government have succeeded in shifting national beliefs to the right, as reflected by the loss of overall seats in the Left Bloc, and that this will undermine the new coalitions attempts to roll back some of the less liberal policies of the last ten years as well as their chances of agreeing on policy. Both groups were glad to have change, but were not optimistic that they wouldn’t be voting again in a couple of years.

This entry was posted in Comment and tagged Europe, Politics. Bookmark the permalink.